NELIOTA (Near-Earth object Lunar Impacts and Optical TrAnsients) is a research project that has been funded by the European Space Agency (ESA) since 2015 and uses the upgraded 1.2 m telescope of Kryoneri Observatory and a twin-camera system allowing for simultaneous observations in the Red and Infra-red pass bands. Since June 2021, NELIOTA has been operating in the framework of the project “Consolidating Activities Regarding Moon, Earth and NEOs” (CARMEN, ESA Contract No. 4000134667/21/D/MRP). 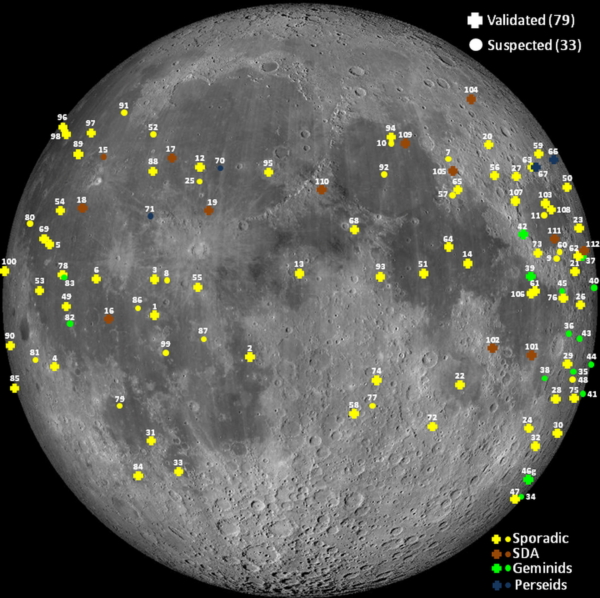 Lunar impact flashes detected by the NELIOTA project up to October 2021.

NELIOTA monitors the Moon for lunar impact flashes due to collisions of small NEOs/meteoroids. The short-term goal of this project is to determine the frequency and size distribution of small NEOs and meteoroids in the vicinity of the Earth. The mid-term goal of the project is to provide the statistical properties of these objects to the space industry for further improvement of satellite shielding.

Observations began in February 2017 and are scheduled to continue until Summer 2023. So far (October 2021), over 130 validated flashes have been detected, while another ~50 have been characterized as suspected flashes (i.e. their brightness was too low to be detected in two different pass bands). According to the recent statistical study of NELIOTA impact flashes of Liakos et al. (2020, A&A, 633, 112), 108 sporadic meteoroids per hour enter the mesosphere of the Earth (altitude ~90 km), while 8 meteoroids per hour strike the lunar surface. The majority of these objects have masses less than 100 g and sizes less than 5 cm, whereas the evolved temperatures of the collisions range between 2000-4500 K.

More information can be found on the NELIOTA webpage.